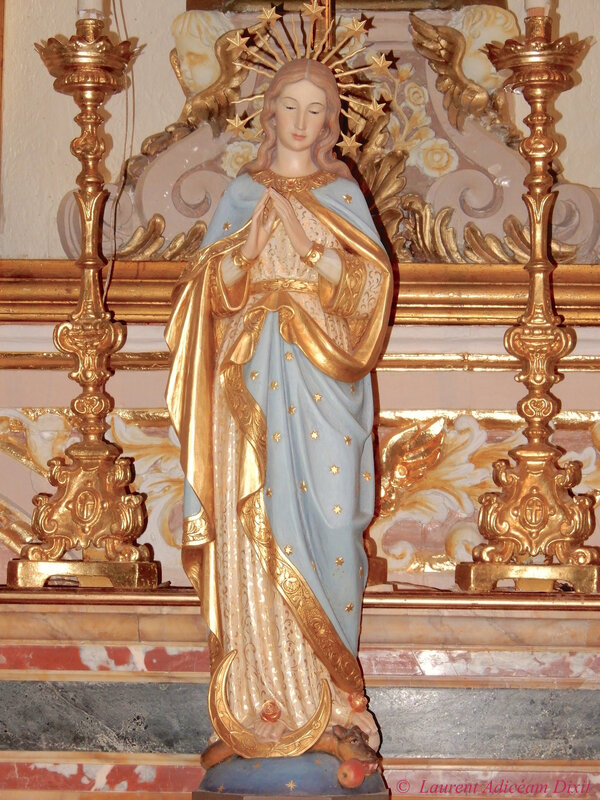 Unlike her son, Jesus, Mary will not suffer the calvary of the crucifixion, it will be totally different. Caravaggio, for example, depicts her last hours in a sepulchral manner in "The Death of the Virgin" exhibited in the Louvre.

At the hour of her death, John Paul II specifies, Mary is transported, glorified "body and soul" before the Lord: this is the dogma of the Assumption, in opposition to certain apocryphal traditions where she did not die because she is preserved from the original sin by the grace of her Immaculate Conception. The 15th of August is a solemn, non-working feast with a liturgical office dedicated to prayers and veneration of the Virgin. The dogma invites believers to live their future under the "mantle" of Mary, under her protection. She leads them along the path of faith to the promise of eternal life, following the example of Jesus through the resurrection.

The origin of the Assumption

Assumption comes from the Latin "assumere" which means "to take with oneself". In the Old Testament, we speak of the Assumption of Elijah the prophet who also prefigures that of Mary. Around the 4th century, the feast of the Assumption of the Blessed Virgin was celebrated in Antioch and then in Palestine in the 5th century. At that time, in Jerusalem, Bishop Juvenal dedicated a church called Kathisma (place to be / seat), between Nazareth and Bethlehem, to her. In the 6th century, it is said that in the East, the Emperor Maurice chose the date 15 August to commemorate the inauguration of a church in Gethsemane dedicated to Mary ascended to heaven, the feast is called Dormition. At the beginning of the seventh century, after the destruction of Jerusalem, a homily by Saint Modest clearly affirms the Assumption into heaven of Mary's body and soul. From the East, the feast passed to the West, which established itself in Rome under the pontificate of Sergius I, who added processions that were later suppressed by Pius V in the 16th century. The edict of 10 February 1638 by Louis XIII, King of France, proclaims 15 August as the Feast of the Assumption as a national holiday (until 1893) in gratitude to the Virgin for a vow made and granted, that of having granted him an heir, the future King Louis XIV. On 1 November 1950, Pius XII announced worldwide faith in the Assumption of the Virgin Mary (no. 44 of the Apostolic Constitution "Munificentissimus Deus" defining her dogma). And in 1964, no. 67 of the constitution "Lumen gentium" crowns its vision of the Church with a contemplation of the mother of Jesus. Mary is more than ever before in the eyes of the faithful a woman of faith, a disciple, a model, Mother of the Church and Peace, Paul VI emphasizes. In the second half of the twentieth century, among other things, the Focolare Movement flourished within the Roman Catholic Church, which designated the Virgin as the perfect reception of Trinitarian love: daughter of God, the father, spouse of the Holy Spirit, and Mother of God, the son.

Mary is perceived differently in the Orthodox, Catholic and Reformed Churches, notably with the dogma: "raised in body and soul".

The meaning of the Assumption

Eastern Christians prefer the term Dormition to Assumption. For these believers, Mary has fallen asleep--she is not dead-she has been put in the tomb, her soul is with the Father and her body, incorruptible, awaits the general resurrection. However, there are traditions associating Dormition and Assumption.
For Catholics, her motherhood irremediably associates her with the destiny of Christ who rises from the dead. Privileged, Mary receives, in advance, this grace of resurrection which fulfills the baptized until the salvation of their souls so that they may be "reborn" like Christ at Easter (passage in Hebrew). This is God's plan in his Providence, and this is what is affirmed in the prayers, homilies and songs in the Marian liturgy. Also, the Marian apparitions presuppose that Mary is alive in heaven, "body and soul", which is perhaps assimilated to the work of the "assumpta" meaning that Mary has been assumed by the Most High to live eternally with the Holy Trinity and that Christians, in their piety, confer upon her the place as Mother of humanity.